Volunteer of the Month (February)

Volunteer of the Month – February

Bobbi Steinpreis has been volunteering with the Humane Society of Sheboygan County for over 3 years, ever since hearing that we try to help every animal that comes through the shelter. She immediately knew she wanted to be part of this organization.

Bobbi is essential to our volunteer team, transporting cats to our PetSmart adoption centers in Sheboygan Falls and Grafton. The PetSmart adoption centers are fully run by volunteers! Upon the cats’ arrival, she helps them to get settled in. In addition, she often helps out at TNR days and Adoption Events at PetSmart. Bobbi loves that volunteering allows her to be a part of the animal’s story. She also enjoys meeting the great people that adopt these furry friends.

While she has many memorable moments, Bobbi recalls her fondest. The Humane Society of Sheboygan County was in need of foster homes for a number of animals that were surrendered. That’s when she and her husband decided to foster a female dog. Ever since, she became a part of their family and she reports that she is one of the best dogs they’ve ever had.

When asked what she would say to someone who is interested in volunteering with HSSC, Bobbi answered, “Knowing you are a part of an organization doing so much good for these animals is very rewarding. I have learned a lot about caring for animals. Even the simplest task of cleaning cages is an important part of their story.”

Thank YOU Bobbi for being a part of these animals’ stories. We truly could not do it without you! 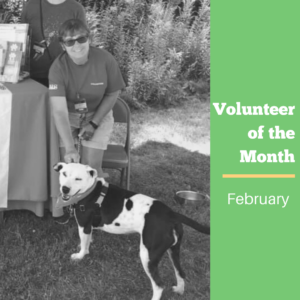