Volunteer of the Month (October)

Volunteer of the Month – October

Dog lover and father, Phil has been a volunteer at the Humane Society of Sheboygan County since April 2018.

Phil inquired about volunteer opportunities hoping to expose his children to the experience of volunteering in their community, and found that there were age requirements when it came to walking dogs. He didn’t let this discourage him however, and decided that they could wait until the day they were eligible.

In the meantime, Phil moved ahead and has actively dedicated his time as a volunteer to loving on pups, and learning from the many inspiring people he meets. He says that one of the most rewarding experiences is building bonds with the many dogs he encounters.

One of his most memorable moments Phil recalls was building trust with a dog named Izzy, a misunderstood pup in need of a second chance. He recalls that the animal had come in under the pretense of it being aggressive. But all was not as it appeared. Upon approaching Izzy’s kennel, he saw that she was backed into the corner and barking, but after slowly approaching her Phil was able to calm her nerves. Just a short while later she was being goofy and asking for belly rubs – proving that she was all bark and no bite.

The feeling of that day is something that Phil won’t soon forget, and Phil’s positive impact here at the shelter is something we won’t. For the respect and patience you have for our dogs, and the time you have donated to our shelter, thank you Phil! 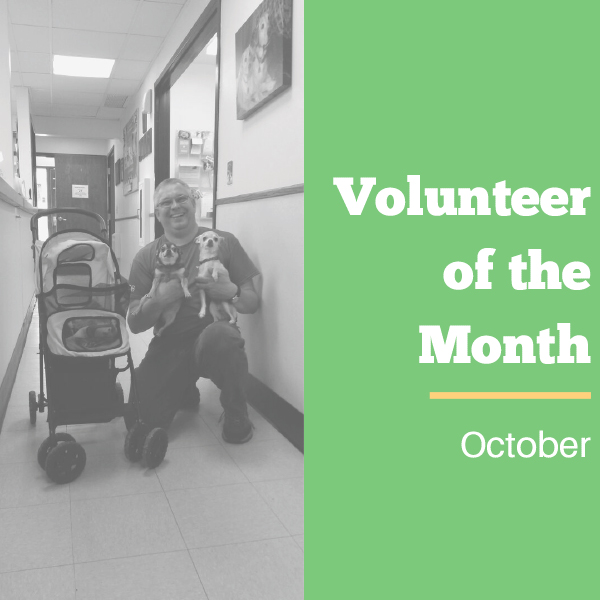