Sheboygan – the Humane Society of Sheboygan County announces the appointment of two new members on its Board of Directors.

Joining the Board of Directors are Sarah Deering and Sara Brotz. The new Board members are examples of excellence in relation to their specific fields, having exhibited numerous notable academic and personal achievements. “We feel confident in the valuable contributions that these exceptional individuals are able to bring to the table,” says Andrew Viglietti, Executive Director of the Humane Society of Sheboygan County.

Sarah Deering is a current employee at a large local insurance firm. For the past 10.5 years, however, Sarah had actively pursued a career in animal welfare. She began as an Animal Care Technician at the Wisconsin Humane Society, eventually rising to the position of Shelter Operations Manager at the Ozaukee Campus. Sarah has succeeded in earning a Bachelor’s Degree from the University of Wisconsin – Madison, and a Master’s Degree in Nonprofit Management and Leadership from the University of Wisconsin – Milwaukee.

Sara Brotz is currently employed in the Research and Development laboratory at Plastics Engineering Company. She graduated from UW-Milwaukee with a Bachelor of Science degree in biochemistry, and a certification in forensic science while also earning a Bachelor of Arts degree in psychology and early childhood education. Sara is an avid animal lover who has taken her interest in animal welfare to a new level by adopting a prior resident dog of the Humane Society of Sheboygan County.

Since 1964, he Humane Society of Sheboygan County, an independent nonprofit, has been dedicated to its mission: prevent cruelty to animals, relieve suffering among animals, and extend humane education. It is Sheboygan County’s only open admissions shelter and depends on public support for its programming. The Humane Society of Sheboygan County focuses on accessible spay and neuter programs in an effort to beat animal population at its core. Creative adoption efforts and dozens of programs provide support for overlooked animals and work to place homeless animals into loving families. To learn more, visit https://adoptsheboygancounty.org/. 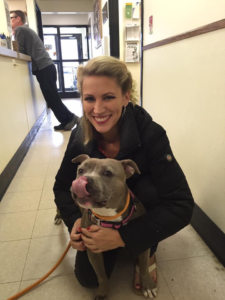